The Centre specifically supports research activities related to clean and sustainable chemical synthesis. CGCC’s research program brings together seven (7) inter-dependent topics that allow the generation of Green Profile of molecules and processes, defined in terms of the following objectives:

Solvents are auxiliary materials used in chemical synthesis. They often play a fundamental role in chemical production and synthesis. By far, the largest amount of “auxiliary waste" in most chemical production is associated with solvents. Consequently, as part of CGCC efforts, a number of alternate solvents are evaluated as replacements for traditional solvents. A desirable Green solvent should be non toxic, inexpensive and readily available. More importantly, it should have additional benefits of aiding the reaction, separation, or catalyst recycling whenever possible. In this context, one axis of CGCC research evaluates Green solvents, such as water, supercritical carbon dioxide and ionic liquids, for important synthetic transformations. New C—H activation reactions in supercritical CO2 is investigated by a number of researchers. Further applications of supercritical fluid chromatography as a means to separate enantiomers is also explored. Together, these efforts provide alternative methods to convert available feedstocks into useful products and/or synthetic building blocks.

Conventionally, attaining the highest yield and product selectivity are the governing factors of chemical synthesis. Little consideration is given to the use of multiple reagents in stoichiometric quantities or of chiral auxiliaries, which often are not incorporated into the target molecule and can result in significant side products. It is now recognized that it is highly desirable that all atoms of the starting materials and of the reagents be included in the product. This concept, referred to as “atom-economy," is a key principle in the “Twelve Principles of Green Chemistry" and has altered the way many chemists design and plan their syntheses. Catalysis plays a central role in attaining high atom-economy for reactions, since, in a well conceived reaction, minute amounts of a catalysis can convert a starting material into a product with significantly increased structural complexity. 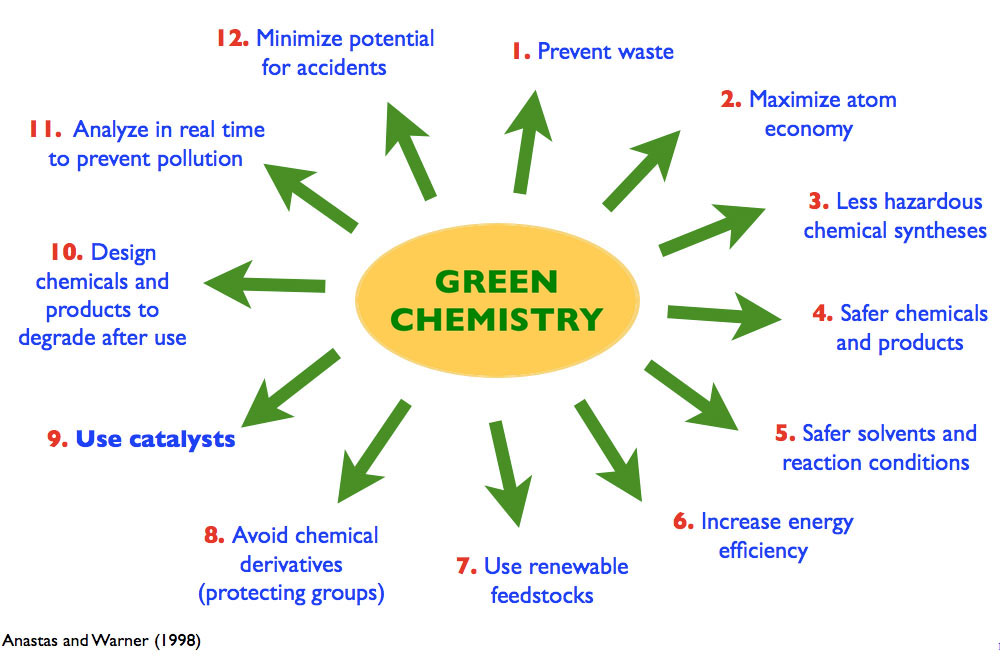 The Twelve Principles of Green Chemistry

Petrochemicals are tremendous resources for fine chemicals production. However, the chemical manipulation of these substrates presents a significant challenge, since they (as well as many renewable resources) are made up of unreactive C—H bonds. As such, these substrates often require long, multistep, energy and waste intensive syntheses to be converted into valuable products. The development of catalytic methods to selectively manipulate bonds, and convert these compounds directly into useful products, referred to as C—H bond activation, is a central challenge in chemistry and is addressed in CGCC research. Efficient C—H activation offers many Green advantages, including atom-economy, waste minimization, and a decrease in the number of synthetic steps relative to typical methods. Other new catalyzed reactions aiming at forming C—X bonds (X = N, O, halogen) is also studied and developed as well as those aiming at forming C—C bonds. These new methodologies should play a central role in the preparation of novel bioactive molecules.

Heterogeneous catalysts have significant Green advantages over their homogeneous counterparts, given their easier removal of the metal catalyst from the reaction mixture. This also helps to ensure that there is no contamination of the product by the metal. CGCC researchers explore two types of heterogeneous systems: homogeneous catalysts immobilized on solid supports and high-surface area nanoparticle catalysts. Each can provide a platform to further enhance both the Green and economic profile of a number of the homogeneous catalytic reactions developed above and induce a large number of collaborations. Both approaches take advantage of the expertise in surface chemistry that exists in CGCC.

Not only are novel heterogeneous catalyst systems developed, but the mechanistic aspect of the processes is also studied. CGCC researchers have already had significant success in using a state-of-the-art surface science/mechanistic approach to understanding key catalytic reactions. For example, scanning tunneling microscopy (STM) was used to achieve sub-molecular resolution imaging of asymmetric intermolecular interactions on a catalyst surface. This type of study yields profound new insights on the mechanism of asymmetric synthesis on surfaces.

Heterogeneous catalysis is often believed to be too difficult to study in a fundamental way. However, in the present global context of pressing concerns related to sustainable development, the study of heterogeneous catalysis is undergoing an explosive renaissance. CGCC is very well placed to take part in this worldwide effort in catalysis and to lead to breakthroughs in a number of Green chemistry catalytic processes.

As an alternative to synthetic catalysts, Nature has created extraordinarily effective catalysts for biological and chemical transformations, which, in almost all cases, operate in the Green solvent, water. A major thrust of Green chemistry involves the use of biological catalysts or mimics of biocatalysts in chemical syntheses and processes. The desirable features of enzyme-catalyzed reactions for chemical synthesis include high substrate specificity, high regio-, stereo- and enantioselectivities, and mild reaction conditions in aqueous media. Some groups collaborate by using enzymes to catalyze the regio- and stereoselective hydroxylations of unactivated C—H bonds in water. These are key reactions in the synthesis of many fine chemicals and pharmaceuticals, but are usually difficult to reform. The mechanistic aspect of the enzymatic reactions is also pursued as part of CGCC’s program. For instance, the study of the directed evolution of enzymes in order to gain a better understanding of enzymatic catalysis, to create novel biosynthetic activities, and to contribute to the improvement of the strategies is undertaken.

Traditional synthetic methods use multiple steps to create the levels of molecular complexity desired in products. From a Green perspective, these methods have significant limitations: they rely on reagents not fully incorporated into products, require repeated solvent use, suffer from diminishing yield with reaction number, and require a repeat of this sequence to generate variants of these products to tune properties. An intriguing alternative approach would be to prepare products directly from readily available resources. CGCC researchers develop new non-catalytic Green transformations that comply as much as possible with the atom economy principle. These efforts provide a set of transformations that are easy to perform (one step), create minimal waste, and offer access to molecular diversity for the synthesis of new polymers, drug scaffolds, and new materials, all in a Green manner. In addition, they develop new supported reagents and catalysts, study the efficiency and reactivity of the new systems compared to their parent analog, test the complete removal of the reagents’ by-products and investigate their potential recycling and reuse. Several supports that range from soluble ionic liquids and phosphonium salts to heterogenous matrixes is investigated.

The catalytic transformation of biomass into valuable feedstocks creates new opportunities for Québec’s forestry sector. This important area seeks to transform the existing petrochemical-based chemical industry into one based on renewable materials for Nature. The production of industrial chemicals from renewable materials, such as plants and algae, is still in its infancy, yet is potentially vast. CGCC focuses on developing new bio- and chemical catalytic systems to generate important new biofuels and other commodities. In order for the biofuels industry to compete with current petrochemical manufacturing, waste streams that are created during biomass refinement must be converted into value-added chemicals. New catalytic processes that convert current bio-refining “waste" into important commodity chemicals is thus investigated. Initial efforts are focusing on the development of novel, well-defined transition metal complexes to effect chemo- and regioselective dehydration and deoxygenation reactions of polyoxygenated substrates. This important axis has been recently added to CGCC’s research activity profile.

The creation of alternative methods and synthetic platforms to convert feedstocks into useful products and/or synthetic building blocks via Green methods must also undergo careful scrutiny. While these may be effective processes relative to traditional synthetic methods, whether they are indeed environmentally benign must be carefully examined. Ultimately, in each of these Green chemistry studies, it is critical that we determine if the processes and the new chemicals synthesized are truly Green. The pollution potential of both the native form and degradation products/eco-metabolites of Green replacement molecules or processes will be studied.

A notable feature of CGCC is the inclusion of management and policy experts as members. These researchers study how the processes by which public concerns are (or are not) generated, how controversies are resolved, and how policy changes result when policy-makers and other stakeholders are faced with new environmental and health risks. Their test cases are invaluable in the context of CGCC, as its researchersare finally exposed to the entire process of molecule/process discovery, implementation, environmental life cycle, and regulatory outcome. How technology evolution (i.e. technological change, product substitution, adoption of innovations) occurs is also actively studied, particularly within the context of the chemical and pharmaceutical industry. 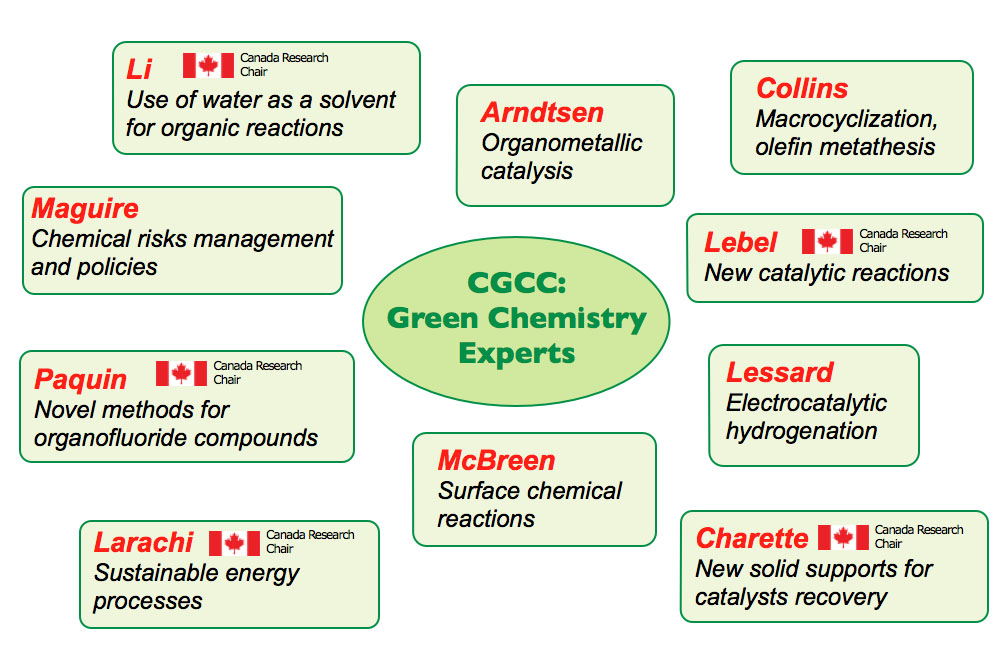 CGCC will present itself as a coherent, one-stop resource for industry and serves as a vital knowledge and information resource about all aspects of Green chemistry.